This robot car is the first arduino-based project that I worked on. I've worked with other microcontrollers such as RoBoard, Freescale, Parallax, and found them to be more frustrating than fun. The Arduino has changed all that.

In the first evening of working with the Arduino, I was able to get an Arduino board to drive some LEDs within just a few minutes. A little more work, and I had motors and servos working.

By the third evening, I combined the VEX robot system with the Arduino and had my first autonomous robot using one ultrasonic sensor for obstacle avoidance:

As with any software project, the hardware went through iterations and improvements. I made version 2.0 of my robot, so that I could have more breadboard space. There wasn't enough space to prototype new electronics on the first version. In particular, I wanted to add an LCD display and go from one to two ultrasonic sensors for obstacle avoidance: 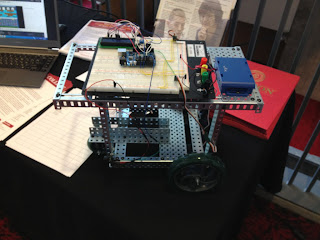 The ultrasonic sensors had to be polled separately so they did not confuse each other. A bigger issue was the robot no longer turned well. Steering of the robot was done by changing the speed of the back motors. The wheels didn't actually turn. Before, the front wheel would just skid sideways. now the robot was now heavy enough that the front wheel no longer easily skidded sideways, like it did in version 1.0 of my robot.

To solve this problem I ordered a different wheel I ordered that solves this problem, by having small rollers on the wheel allowing it to slide sideways. So here is version 2.1 of my robot:

Next, for version 3.0 of the robot, an electronic compass was added. The mechanics of the rear wheels were also redone.

This video shows the robot using the compass to switch between heading east and west in my driveway: